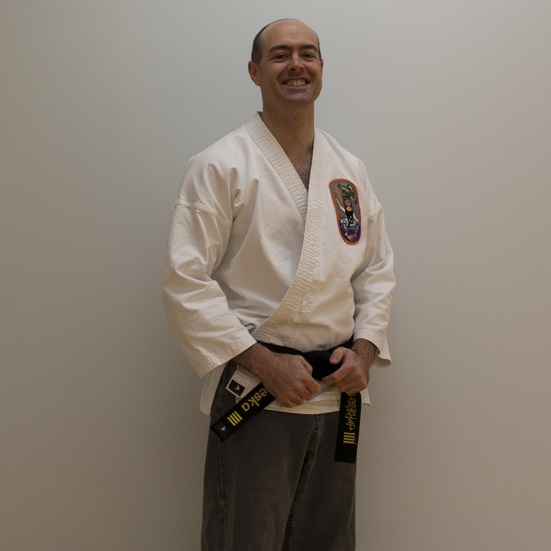 Mr. Joseph J. Sveska started Isshinryu karate as an activity with his father in June of 1992. He was interested in learning the martial arts as a way to defend himself. The first few years instilled in him a passion for the fitness and mental aspects of Isshinryu. He realized early on that it takes more than learning the moves to be successful in the martial arts, and over the years learned to never underestimate the simplicity of the move by the complexity of its execution.
Mr. Sveska has had the pleasure of training with some of the best martial artists and in a number of styles. He has trained with the following Isshinryu practitioners: Master Robert White, Master Norbert Donnelly, Master Martin "Speedy" Gatlin, Master Carl Prather, and Mr. Steven Moody. He has also received training with many other instructors and styles, which includes: Aikido, Tae Kwon Do, Judo, Krav Maga, and Jiu Jitsu. Mr. Sveska believes that a true martial artist never stops learning, and that is why he is currently a student in Jiu Jitsu.
Mr. Sveska's philosophy at Simply Isshinryu Karate and Fitness is easy; it is a way of life. Whatever brings you to the dojo doesn't matter (fitness, self confidence, or self defense). What does matter is bringing a good attitude. No matter what you do in life, a good attitude is going to allow you to get more out of any activity you perform. This is the type of environment that we strive for in our Dojo.
Mr. Sveska is a member of the Okinawan Isshinryu Karate Kobudo Association (www.oikka.com) and trains under Master Christopher Chase, Kaicho (9th degree black belt) and head of the OIKKA. 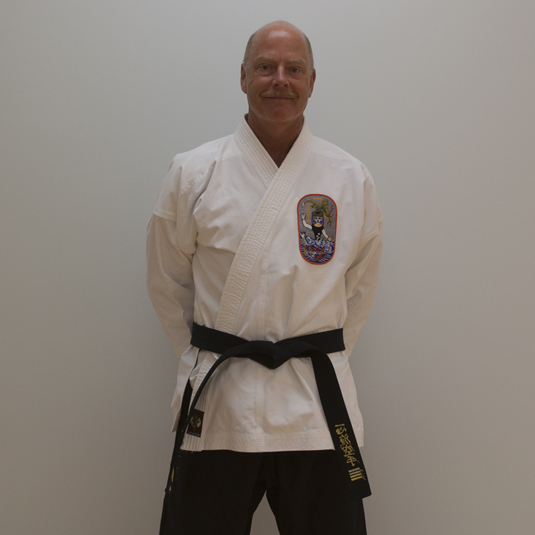 Mr. Kim J. Sveska began his journey in Isshinryu karate in June of 1992. Mr. Sveska started training under Master Robert White, and was primarily interested in cardiovascular fitness and the fact that he was learning karate with his almost 15 year old son, Joseph. Mr. Sveska was previously a serious runner, averaging 50+ miles per week, but was concerned about the effect of long distance competitive running on his joints. Mr. Sveska soon realized that he liked all aspects of Isshinryu karate training, which, in the early days, included quite a bit of cardiovascular fitness, kata, and medium to heavy sparring.
Over the 19 years that Mr. Sveska has practiced and taught Isshinryu karate, he has trained with and been promoted by Master Robert White, Master Norbert Donnelly, Master Martin (Speedy) Gatlin, Master Carl Prather, and Mr. Steve Moody. Mr. Sveska is trained and proficient in all Isshinryu empty hand katas (forms), Isshinryu weapons katas, advanced self defense, and sparring. Mr. Sveska is currently a Go-Dan (5th degree black belt) in Isshinryu karate.
Mr. Sveska's philosophy about karate is simple – Isshinryu karate can get you in shape, help you lose weight if that's your goal, build cardiovascular stamina, improve your self-confidence, enable you to defend yourself when necessary, and improve your self- awareness. Whether your goal is to become a warrior, get in shape, improve your focus, or to be able to defend yourself, karate can help you achieve your goal. Personally – karate has improved Mr. Sveska's relationship with his son Joseph, his ability to focus on serious life events and day-to-day issues, and ability to roll with the punches (pun intended) that we all experience in life.
When Mr. Sveska is not teaching karate, he is a trial attorney that defends health care professionals, hospitals, pharmacies, pharmaceutical and medical device companies, product manufacturers, other businesses, and is a licensed pharmacist.
Mr. Sveska is a member of the Okinawan Isshinryu Karate Kobudo Association (www.oikka.com) and trains under Master Christopher Chase, Kaicho (9th degree black belt) and head of the OIKKA. 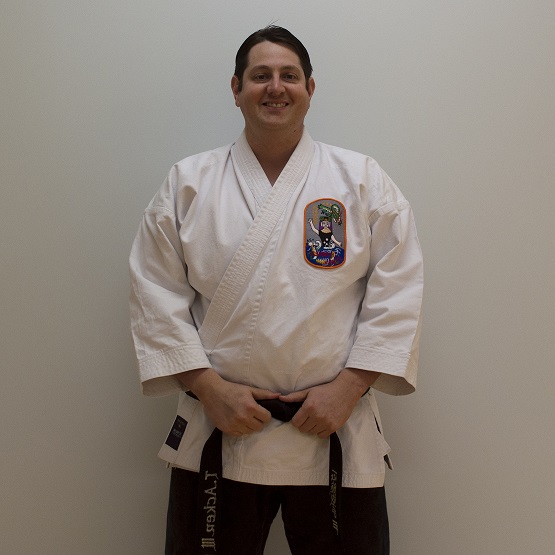 Mr. Thomas E. Acker began his journey in Isshinryu karate in the summer of 1995.  Mr. Acker started training under Mr. Steven B. Moody, and was primarily interested in self-defense, fighting and weapons. Now though Mr. Acker feels that being a martial artist is more than just self-defense, fighting and weapons; Martial Arts is a way of life.  The Martial Arts help you grow mentally, physically and spiritually.  Mr. Acker believes without the structure and guidance of the martial arts he would not be where he is at today.
Mr. Acker has had the pleasure of training with some of the best martial artists in Isshinryu Karate: Sensei Sherman Harrill, Master Norbert Donnelly, Master Martin "Speedy" Gatlin, Master Carl Prather, and Mr. Steven Moody. He has also received training in Tae Kwon Do with Mr. Hayme Serrato.
When Mr. Acker is not teaching karate, he is a Software integration and implementation developer.  Mr. Acker also enjoys Scuba Diving where he has had the opportunity to travel to many places such as Nassau Bahamas, Bonaire, St. Lucia, Grand Cayman to enjoy the underwater world.
Mr. Acker is a member of the Okinawan Isshinryu Karate Kobudo Association (www.oikka.com) and trains under Master Christopher Chase, Kaicho (9th degree black belt) and head of the OIKKA. 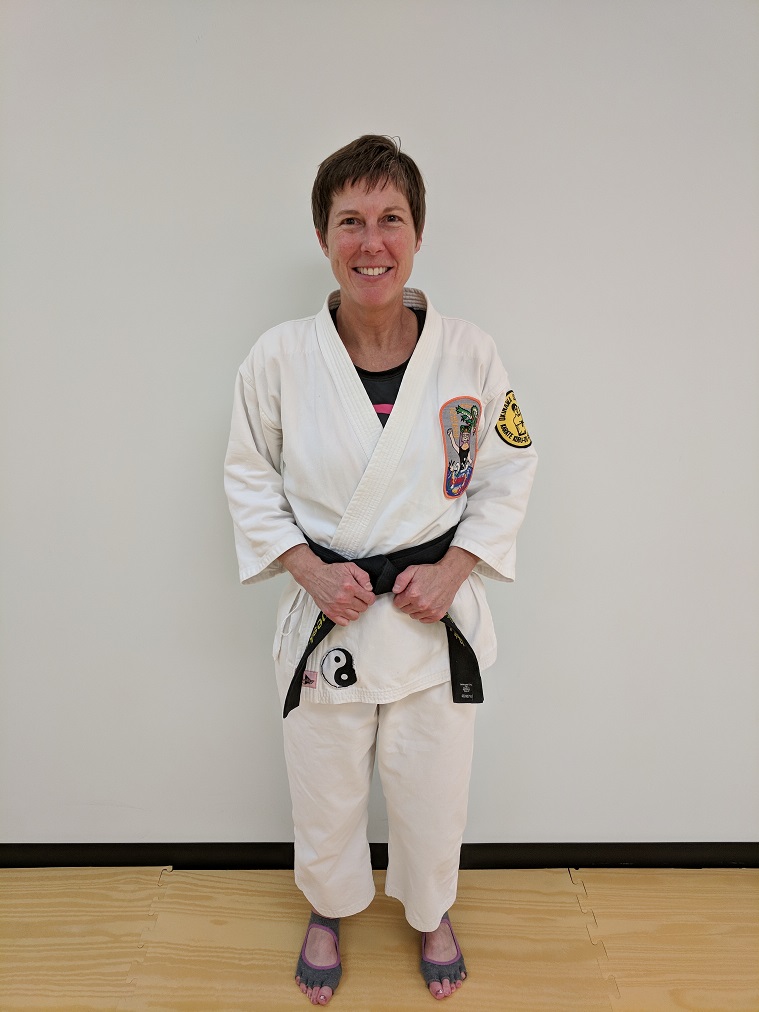 Ms. Barbara A. Sveska started her karate journey in January of 2005 to spend more time with her husband, Kim, and share something he enjoyed so much. Valuing a physically healthy lifestyle, she immediately was drawn to the intense physical fitness aspect of the training. It was not too long before Ms. Sveska realized increased strength both physically and mentally from her committed practice in Isshinryu Karate.
Ms. Sveska believes karate is a life-long journey that presents you with constant learning opportunities for growth and development physically, mentally, and spiritually. Ms. Sveska knows first hand the commitment, dedication, hard work, and sacrifice needed to succeed in attaining goals. Her years of Isshinryu Karate training has helped her to achieve both personal and professional successes. Whatever your goal is (lose weight, get in shape, become stronger, more coordinated, learn self-defense tactics, gain more confidence, etc), Ms. Sveska believes dedication to a disciplined karate practice can support you in achieving those goals.
Ms. Sveska has trained under and been promoted by the following Isshinryu instructors: Mr. Steven Moody, Sensei Joseph J. Sveska (Go-Dan), Sensei Kim J. Sveska (Go-Dan), and Sensei Thomas A. Acker (Yon-Dan).
Ms. Sveska is a member of the Okinawan Isshinryu Karate Kobudo Association (OIKKA), and has the honor and privilege to continue to train under the direction of her Senseis and Master Christopher Chase, Kaicho (9th degree black belt), and head of the OIKKA.